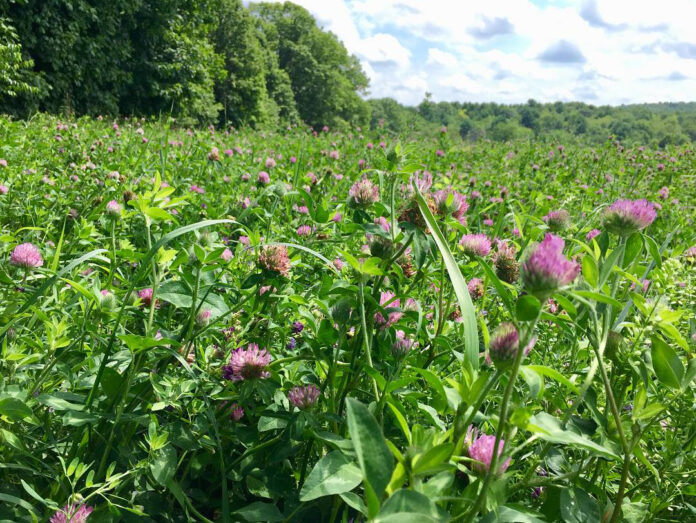 The Natural Mechanisms of Fertility Building

Biological nitrogen fixation is the process that changes inert N2 from the air into biologically useful NH3 in the soil. It can take many forms in nature, including blue-green algae (a bacterium), lichens, and free-living soil bacteria. Other plants benefit from these types of nitrogen fixation when the bacteria die and release nitrogen to the environment. These processes contribute significant quantities of NH3 to natural ecosystems but their contributions are less than 3kg of nitrogen per acre per year in cropping systems.

The most dominant type of nitrogen-fixation is where bacteria live in close association with the plant, like in legumes and a few other species. This process can fix in the range of 10–40kg of nitrogen per acre per year in a natural ecosystem and over a hundred kgs in a cropping system. Nitrogen fixation by legumes is a partnership between a bacterium (Rhizobia) and a plant.

Rhizobia are a group of common soil bacteria that form small growths—or nodules—on the roots of legumes. Within these nodules, the rhizobia bacteria fix N2 from the air and convert it to NH3 which is absorbed by the plant.

Almost all of the fixed nitrogen goes directly into the plant. However, some nitrogen can be “leaked” or “transferred” into the soil (15 -25kg N/acre) for neighbouring non-legume plants. Most of the nitrogen eventually returns to the soil for neighbouring plants when vegetation (roots, leaves, fruits) of the legume dies and decomposes.

However, when the grain from a grain legume crop (peas, beans, lupins) is harvested, little nitrogen is returned for the following crop. Most of the nitrogen fixed during the season is removed from the field as grain. The stalks, leaves, and roots of grain legumes, such as soybeans and beans, contain about the same concentration of nitrogen as found in non-legume crop residue.

A perennial or forage legume crop like clover only adds significant nitrogen for the following crop if the entire biomass (stems, leaves, roots) is incorporated into the soil. If forage is cut and removed from the field, most of the nitrogen fixed by the forage is removed. Roots and crowns add little soil nitrogen compared with the aboveground biomass. This is why mulching a red clover ley in an arable rotation is one of the best ways of fertility building.

When examining the roots of healthy legumes the nodules should be clearly evident and when cut, should be pink or red in colour – this indicates nitrogen fixation is occurring. If the nodules are white or grey, it means they are not fixing Nitrogen and may indicate the wrong type of rhizobia are dominant in the soil. If the nodules are green, it means they were fixing nitrogen but have now stopped, this is usually to do with a dramatic change in growing conditions. If only a few nodules are present, insufficient rhizobia numbers have limited nodulation, or plant stresses such as drought may be inhibiting nitrogen fixation.

As mentioned, rhizobia bacteria are common and often abundant in soils. However, in soil that has been void of legumes for many years, the numbers of rhizobia will diminish. If growing a productive legume crop in soil with low rhizobia populations it may be worth inoculating the seed to ensure good nodulation. Inoculating may also be necessary if you are growing a species that is not naturalised to the soil or one that requires specific rhizobia, like lucerne or lupins for example. 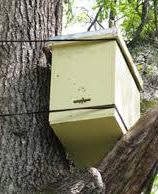 You don’t need to be a beekeeper to keep bees!
Bees in the wild and from commercial hives “swarm” when the hive gets too full. This swarm which includes the old queen and about half of the workers go in search of a new home which in nature would typically be a hollow in a tree. As big trees with cavities are quite rare, natural swarm habitats are in short supply. Bees will inhabit all sorts of cavities if they are big enough to house the colony.

So even if you have no interest in suiting up with a smoker and harvesting honey, you can provide a home for bees by setting up a swarm trap. It is a similar concept to making birdhouses.
A swarm trap is similar to any beehive, just a bit smaller and lighter, it is a box with frames in it, tied up in a tree. Inside, to help attract them, include some bee propolis and a lemongrass scented lure. If you do wish to keep bees to harvest honey, this is also an excellent way to acquire bees for free. Once occupied, the swarm-trap can be taken down from the tree, and the frames transferred to an empty hive. For more about sward traps and plans to build one click here.
Leo Sharashkin is a natural beekeeper who advocates for these ideas click here to watch him speak and explain in detail. 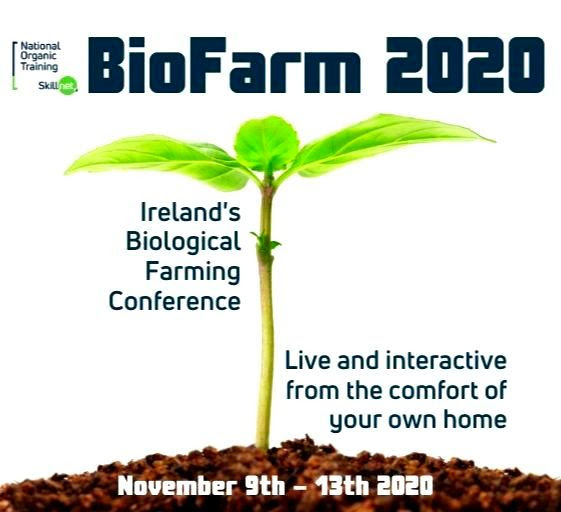 Save the date for Biofarm 2020
Speakers will be announced very soon! 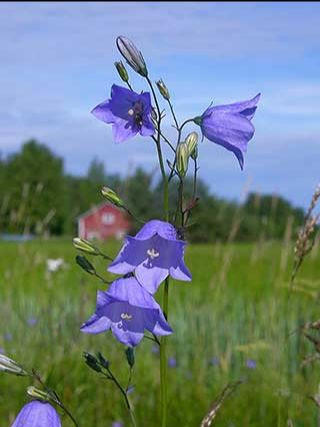 Every so often, browsing videos on Youtube, you find a gem of a channel Offaly Heritage channel has a “Wildflowers of Offaly Series” with John Feehan. John Feehan is an Irish geologist, botanist, author and broadcaster with an encyclopedic knowledge of many things but in this case of plants. It is a wonderful series of short videos profiling wildflowers botanically and culturally with fascinating anecdotes and charming delivery.

Check out the NOTS website for their growing range of innovative online courses.

How To Keep Flies Away From Indoor Herb Garden