Recently Coillte, Cavan County Council, and Killinagh Community Council were joint recipients of the RDS Community Woodlands Award for the Cavan Burren Park. The award was presented by Minister Tom Hayes T.D. at Farmleigh this afternoon. 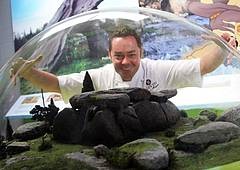 Collecting the award on behalf of Coillte was Bill Murphy, Head of Recreation, Environment and Public Goods, who said, “Cavan Burren Park is an inspiring example of a project that has brought together partners, north and south, to establish a sustainable recreation and tourism resource that seeks to protect archaeological features and landscapes, while at the same creating tourism infrastructure that will be of huge benefit to the local economy. Areas like Cavan Burren Park are essential in supporting rural communities, in creating interesting destinations for people to visit and enjoy.”

It is estimated that over 5,000 people have visited Cavan Burren Park since the summer and it is expected these numbers will rise significantly, as it is believed Cavan Burren has the potential to become one of Ireland’s flagship visitor attractions.

Coillte were also runner up winners for two other Forestry 2014 Awards:

Speaking on the news of Coillte’s awards for Community and Farm Forestry was Gerard Murphy, Managing director of Coillte Forest, said “the ambition in Coillte is to be recognised as one of the most professional and progressive forest management companies in Europe and these awards for our work in farm partnerships and in partnership with local communities and local authorities are a welcome endorsement for our work in this area.”