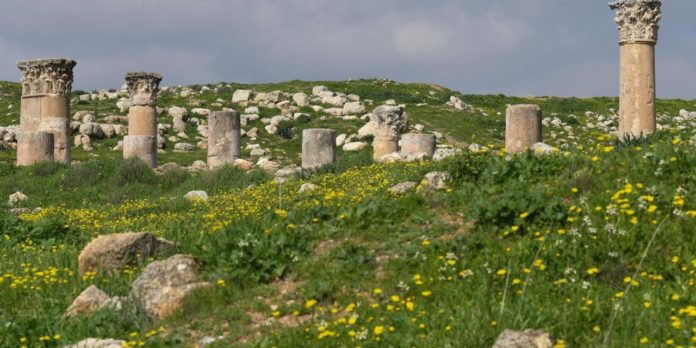 Most people see weeds as a problem. But one farmer has found they can help make dry, damaged land lush again – not to mention absorb carbon from the atmosphere.

More than 60 years ago, when he was a child, farmer Peter Andrews saw his first dust storm. He still remembers it. “The noise was horrendous,” he says. “We hid in the house waiting for it to pass. The whole sky was dark. And the damage we saw the next day was even more terrible.”

The wind had ripped many of the trees on his family’s property completely bare. Some of their horses and cattle asphyxiated, unable to breathe in the dust.

That early experience has led him to a particular calling: trying to regenerate Australia’s land, since dust storms occur in hot, arid regions where there is little vegetation to anchor the soil.

“It really led me… to thinking about how to find solutions for keeping the land in balance,” Andrews says. “Over many decades I learned from observation how to keep the land fertile, how every landscape has its own natural system. Here in Australia, we have ravaged the landscape with European-style agriculture. We need to find a way to regenerate the land.”

In the 1970s and 1980s, Andrews became interested in sustainable agriculture. He looked at the waterways and the plants that were growing on his property and tried to avoid fertiliser and weed killer. He wanted to make the farm as resilient to the weather as possible.

One major issue was drought. Another was that weeds were growing on the property, while native plants weren’t.

You might also like:
• The ‘miracle mineral’ the world needs
• How to use seawater to grow food – in the desert
• The wild seeds that could save civilisation

He had two major realisations. First, plants are fundamental to keeping the land in balance. Second, so is water.

Every landscape, he saw, has its own contours – a point where the water originates from, and a point to which it flows. To regenerate an eroding landscape, you start at the highest point, slow down the water flow, then work downwards, filtering the water with whatever vegetation there is, he explains. This was the genesis of his idea of natural sequence farming.

It has been the driest and hottest year on record for most of Australia. One recent scientific report outlines how the last summer in Australia was characterised by “prolonged, continental-wide heatwaves and record hot days, bushfires throughout Australia and heavy rainfall and flooding in northern Queensland”. Climate change and land clearing have driven soaring temperatures and extreme weather events in Australia, the report says, and “the past four years have been the four hottest years on record for global surface temperature”. Many people, unable to grow crops or feed cattle or sheep, are leaving their farms as a result.

Research from Australia’s Nature Conservation Council (NCC) also warns about deforestation in Australia, especially in New South Wales “on a scale we have not seen for more than 20 years”, says NCC chief executive Kate Smolski.

The NNC report explains bulldozing forests means there are fewer trees to “make rain, cool the weather and store carbon”.

It is because of these intense, and worsening weather, conditions and deforestation that Andrews calls Australia “the laboratory for the world when it comes to adapting to the weather”.

Andrews’s ideas aren’t universally accepted. For decades, he was been seen by many as a maverick. He is not a scientist, and it took until 2013 before scientific evidence showed that natural sequence farming can be effective.

Some critics question if better land management and avoiding destructive farming methods (such as cutting down trees) would make the need for natural sequence farming necessary in the first place. Others disagree with his suggestion to use weeds: conservation projects usually promote planting endemic Australian plants, rather than allowing invasive weeds to grow, as they are thought to compete with native plants for scarce water.

But a pilot site of natural sequence farming, located an hour’s drive east of Canberra, seems to be proving that Andrews’ ideas about weeds can work – if only on a small scale so far. The pilot site is a 6km stretch of Mulloon Creek, which runs through a network of organic farms now using and promoting Andrews’ work.

The United Nations’ Sustainable Development Solutions Network announced in 2016 that the Mulloon Creek Natural Farms are one of the few farming sites in the world that are truly sustainable, and commended the model of natural sequence farming.

At Mulloon Creek, I meet Gary Nairn, chairman of the Mulloon Institute, a research and teaching organisation for regenerative, sustainable farming that promotes Andrews’ work. He points to the invasive blackberries that his team cut down; the cut-down and chopped up shrubs now are clogging up part of a pond, helping to filter it. The sound of running water and small birds fills the air as I get closer.

The Mulloon Institute, which is based in a barn next to a pond that has been named after Andrews, teaches natural sequence farming methods to farmers, scientists and university students. The Mulloon Institute is also working with several Australian universities to monitor the water along the creek, done with piezometers (water measuring equipment) installed by scientists from Australia National University and the University of Canberra.

His team is now working on a further 43km of creek running through 20,000ha of farmland to construct more weedy, leaky weirs, like a dam wall, across the creek. The weirs are made from stones; the cracks between the stones are filled with chopped-up blackberry weeds to filter and slow down the river’s flow.

Despite so little rain, the creek now is running again and pastures that once were arid soil, eroded from the drought, are turning green. This is because the weirs are working, letting the soil absorb more moisture enabling plants to grow along the banks.

“The weeds and weirs take the energy out of the water, rehydrating the landscape,” Nairn says.

The whole process is a bit like creating “giant sponges with weeds”, he says.

“What we have learned is never to pull out a weed until you know what purpose that weed was fulfilling. A lot of weeds usually means there is something wrong with the fertility of the land. If you pull it out, you need to replace it with another plant,” he says.

But those weeds can be chopped up and put into a creek such as at the pond outside the Mulloon Institute.

According to Nairn, in this way, native Australian plants will slowly grow back. Indeed, some are already doing so along the creek.

The beauty of weeds is that they also act like a carbon sink: a system that takes carbon out of the atmosphere and puts it into another form of storage. These can help to control climate change.

“Forests, oceans and soils can all remove carbon dioxide from the atmosphere and store it,” says Christa Anderson, a climate researcher from the World Wide Fund for Nature in the US.

Anderson explains that the amount of carbon dioxide a given ecosystem can absorb depends on where it is and how it is managed.

“While forests have the largest potential for additional carbon storage and therefore can help mitigate the emission of carbon dioxide and other greenhouse gasses, there are also a large number of farming practices that can also increase carbon storage,” Anderson says.

“We need to remove carbon from the atmosphere by improving forest management, protecting and restoring wetlands, peatlands and seagrass, and improving our farming.”

Some scientists are now wondering if even small projects like the one at Mulloon Creek could work as a carbon sink to restore habitats, if enough farmers also make “giant weed sponges”.

This is important because so much forest is being cleared for massive scale agriculture that carbon sinks are being lost. Swathes of northern New South Wales and Queensland have been made arid from land clearing for massive farms. But, gigatonne for gigatonne, soils and plants hold twice as much carbon as the atmosphere – so more plants, not fewer, are needed to absorb our increasing production of carbon from burning fossil fuels.

The question is whether smaller projects like this will be enough to bring farms back to life, given the huge rates of deforestation and soil degradation.

Nairn believes there’s a reason for optimism. “You just need the will to do it,” he says. “What we are proud of is that we are giving young people hope with natural sequence farming – hope that you can still live on the land if you manage water and plants better.”

Peter Andrews agrees though he adds that he always disliked the term natural sequence farming.

“The name annoys me. It’s just really observing the landscape and returning it to what it used to be, to the best of your ability. Every plant has a purpose.”

While world leaders debate if, when and how carbon emissions should be cut, one sustainable farm at Mulloon Creek in Australia is proving low-tech weeds can help to sink carbon and make a river run again. It’s a small but significant solution to a serious global problem.