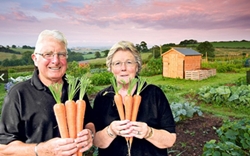 There has been a rise in disagreements between allotment plot holders, who have accused rivals of everything from sabotaging prize-winning vegetables to burning down greenhouses.They are meant to be places where gardeners can tend their plants and escape the stresses of modern life, but it is not all a bed of roses down at the allotments. A steep rise in disagreements between plot holders is revealed in figures from the National Society of Allotment and Leisure Gardeners.

The organisation was asked to intervene in more than 3,500 cases last year. Some of the worst disputes involved owners sabotaging rivals’ prize-winning vegetables, poisoning water tanks and even burning down greenhouses.The society said it had seen a steady increase in disputes after a surge in interest in gardening meant allotment sizes were cut, putting plot holders in closer proximity. Plot holders have also been adding elaborate sheds and even bee hives, which can cause conflicts.

Get the blooming gorgeous garden look this summer with GroMór