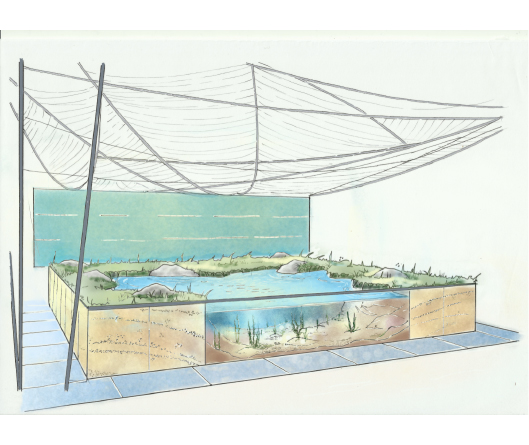 The Bord Iascaigh Mhara (BIM) Aqua Marine concept garden designed by Oliver and Liat Schurmann aims to raise awareness of Ireland’s marine environment and the need to protect it against the growing threat of marine waste. The underwater marine garden resembles a giant rock pool where seaweeds, sea creatures and other marine habitat live in harmony. This may be one of the first times a garden that’s entirely underwater has been staged at an international garden show.

Aqua Marine sponsored by BIM portrays the magical and natural beauty of this underwater world full of life. However,  evidence of pollution, in particular, plastic waste, surrounds the garden.

A large fishing net is suspended over the marine garden. It symbolises the actions being led by BIM with fishing communities and the wider seafood sector to protect Ireland’s marine environment.

Husband and wife team Oliver and Liat Schurmann are founders of the well-known Mount Venus Nursery in Rathfarnham, Dublin.

They have been creating show gardens for the past 16 years, drawing on their vivid imagination to create new and cutting edge garden designs. No strangers to the winners’ enclosure at Bloom, they have won nine awards for their show gardens.